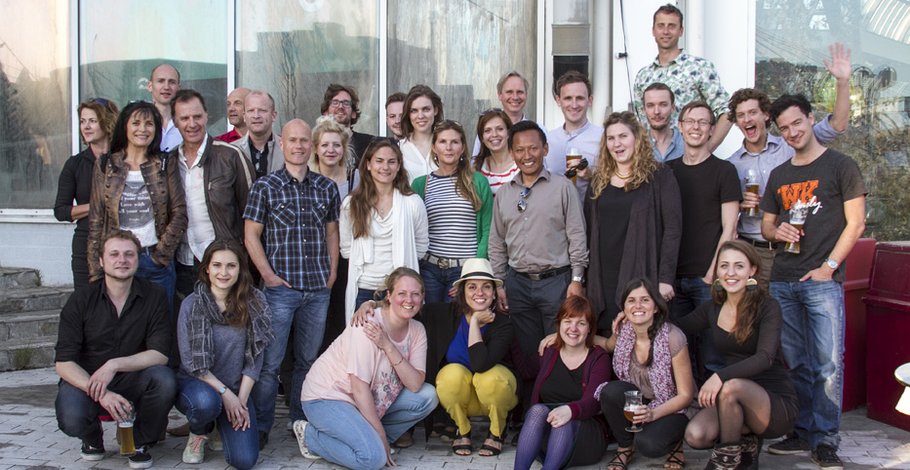 What do a piece of log, a rather short quiz, a fast-paced origami workshop and an insect hotel have in common with a refurbished swimming pool, late night funky music and lots of drinks? That’s right, absolutely nothing. However, during Except’s Grid Night ‘Cities go Wild part I’ on the 4th of June 2015 we combined them nonetheless as a tribute to biodiversity in our urban environment.

We started the evening off at the Aloha Bar in Rotterdam with a workshop where the participants learned how to fold their very own paper animals. To add a competitive aspect we offered a prize to the person who would prove him- or herself to be the greatest origami master of the evening.

After about half an hour of fanatic folding we threw all origami pieces into a bag and let the origami gods decide on the winner. It turned out that ex-Exceptional Tijn Schmits was destined to become origami master of the evening. His price: a piece of log on which he can grow his very own Japanese mushrooms! Congratulations Tijn, may the log motivate you to continue practicing your newly discovered origami skills!

Next up was the quiz to determine which audience member was the most knowledgable in the topic of urban biodiversity. It consisted of 15 multiple choice-questions of increasing difficulty with one open question in the end should the quiz end in a stalemate.

Surprisingly, after only five questions (and at least an equal amount of drinks) we already had a winner with every other participant being eliminated.It was our very own Exceptional Chantal Klaver! She won the insect hotel and a package of freshly squashed bugs to go with it. We wish her the best of luck with her prize and hope she will find joy in having lots and lots of insects in her garden.

Once all the excitement was over it was time for the last and most important part of the evening: the moonlight drinking and dancing. Although most people by this time were not concerned anymore with in-depth discussions on urban biodiversity it was obvious everybody was having a wonderful and creative evening. We continued on until long after the sun had finally set. It was a great evening. We learned a lot about biodiversity, our role in it, and ourselves. We also learned how ducks reproduce but that’s a story for another time...

Make sure to join our September event Cities go Wild part II in Utrecht. During this formal evening we’ll present a case study of Utrecht city center, provide renowned experts with a podium and tackle urban biodiversity on a professional level!

The Grid Night is a quarterly event hosted by Except for all of its associates and their partners, friends and collaborators. The aim is to bring together like minded and inspiring people, and provide inspiration, connection, and an opportunity to enjoy the finer things in life. The program is organized by new members of Except, always a surprise, always different. The next Grid Night is in September 2015 and you're invited!